Below is an excerpt from DebraMarie Burslem’s ebook “Gaze A Moment –
the Signature of God Revealed”
– Magnificat Meal Movement. 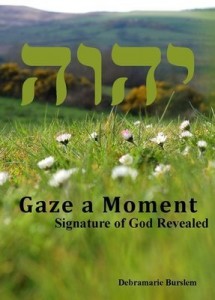 The Signature of God lettering has been revealed in the sky in a remote village in Northern Spain in June 1961. Four little girls from the village of San Sebastian De Garabandal were stealing apples from the teacher’s garden. Suddenly a loud bang was heard above them. When the guilty girls looked up they saw an angel type filmy form hovering above them and then in the sky a group of strange markings. Over the next few days the 4 young girls traced the sky markings out everywhere like a fixation of a childlike game.
Please see Magnificat Meal Movement Video Tapping & Gazing

What they had seen in the sky in bright divine dimensional lights were the ancient Hebrew letters for the Name of God in the modern form used since the 3rd century Gregorian calendar. This is in the form of ancient Hebrew/Israelite lettering as used today, so Hebrew scholars of today would clearly recognize it. The mountain area of the village located in the caves vicinity of Northern Spain has historically and biblically had enormous influences of the ancient Hebrew peoples.

The young Spanish girls lived in an isolated mountain village with no electricity and little contact with the outside world. They definitely knew no Hebrew scholars around that location any longer to influence them. In fact the crowds who flocked to the location for over 18 months of continuous bizarre type activities that followed there, had no understanding of the value of the event or the letterings either. This continued until the arrival in the village of a divine influence through a female new resident to the mountain village in June and July 1994. Even then, few were interested or even able to understand the Light message focus shown by the letterings or any of the bizarre sightings of the 1961, for these times. Similar public reactions of condemnations or ignorance from the general public occurred with the following “crop circles” events that followed on mostly in Europe to this day.

The appearance of the Name of God in the air above them on a summers’ evening of 1961 was a message to all earthly souls to use the Name of God in a creative way. It actually contained also the sign of “the presence of God is here” intrinsically in the same letterings. It also heralded the imminent 3rd time /”day” of existence with Oneness with God as outlined in the old Bible and new Bible (New Testament) and other ancient books of prophecies for the Hebrew people.…..

So what does it all mean for each of us?

The physical lettering of the Name of God is a way, just like a funnel, to draw down the mighty power of God into earthly existence. We can use the Name of God to draw down the heavenly powers needed to help our physical journey of life. This is especially significant to those who cooperate with the divine plan of restoration (redemption) who need to use this power during this final preparation period for MAGNIFYING the glory of the full Light Presence of God as a welcome path of glory movers for God to be in Oneness with all souls who are awakened. (Please see Magnificat Meal Movement Magnify The Glory – Part 1).

The young Spanish girls gazed upon the power signature in Light in Spain in 1961 but have not used it since that time due to lack of correct guidance or knowledge.

We too can gaze upon the Name of God signature shaping and learn how to receive the divine power to be used personally in this final preparation time for glory, and to become complete with mankind in God as “Ima” companions. In the Magnificat Meal Movement  workshops globally, we aim to assist willing and worthy souls to personally attain this promised gift of divine power and Oneness.

Exodus 3.15
“This Name is My Name forever, and this is My memorial (sign) to all generations.” 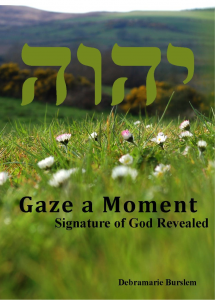